Brad Keselowski and RFK Racing were docked 100 driver and owner points with a hefty $100k fine and four races suspension for Crew Chief Matt McCall after the appeal upheld by NASCAR.

The penalty handed down to RFK saw Brad Keselowski drop down the Cup Series standings to P35 from a possible playoff spot and he’s been only able to gain back 4 spots so far.

Heading into Martinsville this weekend Brad Keselowski cleared the air on the reason RFK Racing and was penalized by NASCAR officials.

yeah we had a panel that we had repaired tail panel and it had a key feature that nascar was not repaired adequately enough and uh it’s tough situation it was we didn’t want to run the tail panel we didn’t have any new tail panels to put on the car and uh we had a tail panel with three races on it. – Said Keselowski

we did some repairs to it we probably could have done a better job on the repair and we put nascar in a tough spot and it’s kind of like a trickle-down effect i wish we’d you know quite frankly done a better job repairing but we can’t go back on it i understand nascar’s position it’s kind of one of those things where everybody’s right and everybody’s wrong at the same time and you know ultimately we’ll have to learn. 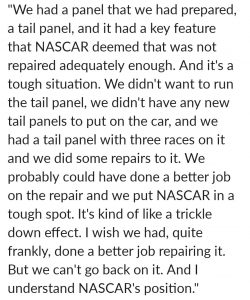 RFK Racing released a statement saying they are disappointed about the outcome of the appeal hearing they have no intention to appeal further.

“Although we are disappointed in the outcome of the appeal hearing, we are advocates of the process NASCAR has set forth and appreciate the opportunity to make our voice heard in the matter. With that in mind, we do not intend to pursue this further and our focus remains on our upcoming races, with Martinsville up first this weekend,” RFK Racing Public statement red.

1 thought on “Brad Keselowski opens up why series officials penalized the No. 6 team after Atlanta”