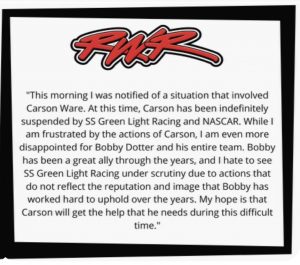 Carson Ware was scheduled to compete in this weekend Kansas Lottery 300 at Kansas Speedway, however according to a statement from Rick Ware Racing, the North Carolina-native, has been indefinitely suspended by both SS Green Light Racing and NASCAR.

NASCAR Driver Carson Ware has apparently been arrested in NC on assault and property damage charges. No other confirmed information at this time. #NASCAR pic.twitter.com/eI2gu1WCWS