Brad Keselowski was at fault to knock Austin Dillon out of the race at the Cup Series race at Michigan Speedway.

At the end of stage 2, Keselowski’s car made contact with Dillon’s car, thereby seeing the latter car to the outside wall. As a result, Dillon’s car spun and slid down to the inside of the track.

A HARD HIT for Austin Dillon at the end of Stage 2!

This puts him in a must-win situation next week at Daytona. #NASCAR pic.twitter.com/fFxZseIlEX

Due to the incident, Dillon is now not willing to talk to Keselowski.

“It’s a really unfortunate situation. We’re right towards the end of the stage, there was a stage point on the line. I didn’t want to just give it up, we’re racing really hard and I made contact and wrecked Austin. I’m glad he’s okay because this wreck was nasty.

“I’ve sent him some messages, but I’m pretty sure he probably doesn’t want to talk to me right now and rightfully so.”

Keselowski’s action not only angered Dillon but his grandfather Richard Childress too who said that Keselowski wrecked Dillion on purpose and he can “kick his a**.” 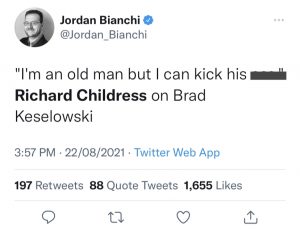 With only one race left in the regular season, Dillon only chance of making it to the playoffs would be to win the final race at Daytona International Speedway.