Kyle ‘rowdy’ Busch became the first NASCAR driver to win triple-digit Xfinity races when he defeated Justin Allgaier in the inaugural Tennessee Lottery 250 at the redevelop track where Busch also won an Xfinity race in 2009.

However, the Ally 400 NASCAR Cup Series prove to be a much tougher test for two time Cup Series champion who could be heard complaining over the radio on various occasions.

“I can hear just fine. There’s nothing to talk about.” – Busch replied after his JGR team wondered why he hadn’t said anything for a while.

"I can hear just fine. There's nothing to talk about."
Kyle Busch responding after his team wondered why he hadn't said anything in some time. 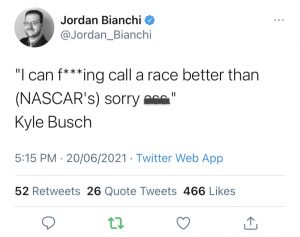 "It would be nice if we could get this f***ing car under control!"
Kyle Busch

8 thoughts on ““I can f***ing call a race better than NASCAR’s sorry a**.” – Kyle Busch annoyed at Nashville”