NASCAR Next Gen Car that is set to make its debut in the 2022 season made its first public appearance on Wednesday.

The series was set to make its debut in the 2021 season but was posponed by a year due to the effects of the pandemic. Chevrolet, Ford and Toyota revealed their respective looks for the Next Gen car in the unveiling.

“We really wanted to get back to a promise that we had made to the fans, which is to put the ‘stock’ back in stock car,” said NASCAR president Steve Phelps. “That was extremely important to us and our fans, but just as important to our fans is the racing on the race track.

“Simply put, this car will make our sport healthier and stronger. It’s an exciting day for our industry and our fans, and I’m proud of all the work that went into bringing us to today.”

The #NextGen is here.

The car represents the seventh generation of race cars in NASCAR Cup Series. NASCAR assigned a number of drivers to test the car last year and the development was complete back in February. 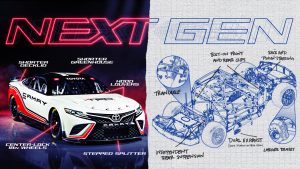 One of the drivers to test the new car, Kurt Busch, outlined ways to be succcessful for the drivers and the teams with the new prototype.

“I think the key thing for any driver to be successful, no matter where you are and what you’re doing – you have to adapt,” he said. “And the adaptability of a driver, and his openness and willingness to challenge himself or herself is to find things that work for them and the team, and make sure they are confident in those directions and go that way.”