ARCA driver Derrick Lancaster, 48-y-o, was to the University Of Alabama burn unit after he was involved in a flaming wreck during Saturday’s ARCA Menards Series race.

Lancaster hit the outside wall with a hard impact in the final laps of the race after apparent contact with driver Drew Dollar. Drew was running on the inside of Lancaster’s No. 29 Toyota ride on the backstretch when the 48-y-o went smashing into the wall. His car was engulfed in flames however, Lancaster exited the car minutes later.

5 laps to go: caution, and an immediate red flag for a fiery crash involving Derrick Lancaster

He is out of the car pic.twitter.com/Jhu0wMN9et

Emergency personnel rushed to the car who were trying to put out the blaze. Lancaster was able to undo his window netting and climb from the vehicle. The emergency crews successfully extinguished the fire, but the flames destroyed the stock car. 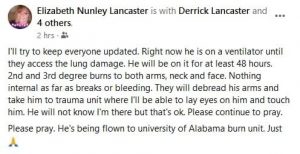 “MRI results confirmed a hairline fracture at the base of his skull. Also known as a Hangmans fracture, or Atlanto occipital joint fracture, or hairline basilar skull fracture,” Lancaster’s wife Elizabeth wrote on Facebook after the wreck. “Direct from the mouth of the neurosurgeon, this is the same injury that Dale Earnhardt succumbed to, the only difference is it severed Earnhardt’s spinal cord. He is a very lucky man.

“Derrick will not require surgery but will be in a neck brace for 3 months, at all times, and absolutely no driving for 3 months. The worst words Derrick heard today was that he should never race again. … Those words nearly killed him. But he knows he is very lucky to be alive.”

1 thought on “Update: ARCA driver transported to hospital in serious condition after flaming wreck at Talladega”