Jimmie Johnson was furious with Denny Hamlin in the Cup playoff opener at Darlington Raceway after the two cars came in contact with each other.

Hamlin had a disappointing finish to the race. Entering the playoff with six regular-season wins, Hamlin could only finish as high as 13th while his championship rival Kevin Harvick won another race to make it eight wins this season.

One highlight of his disappointing race was missing the pit road on Lap 309 of 367. While trying to enter the pit road, Hamiln’s rear bumper made contact with Johnson’s No. 48 Chevrolet.

[Read More:  ‘I don’t even know how we did that!’ — Harvick surprised with his win]

Johnson was particularly displeased with the incident and was heard saying, “No F***** hand signals? Nothing? What the f*@k???” 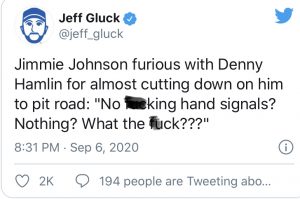 Johnson finished 18th in the race.

As for Hamlin, he is second in the NASCAR Cup Series Standings.