Dustin Skinner, the son of former NASCAR driver Mike Skinner, has apologized for a rude post on social media in following a noose being found in Bubba Wallace’s garage over the weekend at Talladega Superspeedway.

The post qouted, in part, “Frankly I wish they would’ve tied [the noose] to [Wallace] and drug him around the pits because he has single-handedly destroyed what I grew up watching and cared about for 30 years now.” It appears to be a Facebook comment, and the words have been condemned by the Skinner family. 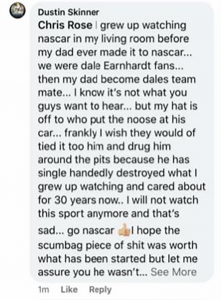 After he realized the post started to get attention, drawing criticism, Dustin Skinner claims his comments were not about race.

“I love everyone this was not about race at all,” Skinner stated. “I disagree with what [Wallace] is doing, but it was stupidly foolish for me to say what I said and I truly regret every bit of it. If there was a way to take last night back I would. All I can do is say I’m sorry. I love everyone and wish the world to pull back together and us all find a positive way to agree or disagree.”

Another Noose found in tree hanging at NASCAR track

“I am devastated by what he said and have spoken with him regarding his comments,” Skinner said. “While I do not believe in airing family grievances on social media, I feel strongly that it is important I publicly state that his comments do not reflect the opinions of Angie or me, and we apologize to any fans and industry personnel who were hurt because of his comments.”

Monday, authorities at the FBI and U.S. Department of Justice said they would also investigate the incident as a civil rights violation.