A Facebook user by the named Chris McDonald went viral as the user claimed that the noose was actually a Serpentine Belt. However, the comments were made without basis and investigation. 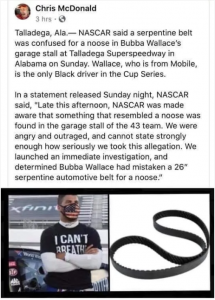 However, NASCAR statement said that a noose was found in Wallace’s garage. The statement read:

Since then, NASCAR President Steve Phelps has stated that the culprit for the incident will be banned for life from the sports.

[Read More: Noose culprit to be banned from NASCAR for life – NASCAR President]

The investigation is still going on regarding the incident.