A makeshift noose was discovered hanging from a tree at the Sonoma Raceway in North California and officials stated they are currently investigating the matter.

It turns out the noose found in Bubba Wallace garage on Sunday might not have been the first one found at a NASCAR track over the racing weekend. 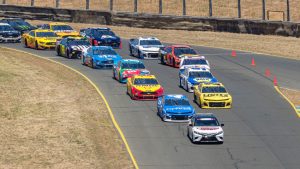 Raceway President Steve Page stated a “piece of twine tied in what appeared to be a noose” was found hanging from a tree on Saturday behind a former administrative office, news outlets detailed.

Noose culprit to be banned from NASCAR for life – NASCAR President

“A piece of twine tied in what appeared to be a noose” was discovered “hanging from a tree on raceway property” at Sonoma Raceway on Saturday, track president and general manager Steve Page said in a statement, via ESPN. The track was closed at the time the apparent noose was found.

“Our staff, on-site business tenants and local law enforcement have been contacted and asked to share any information they may have,” Page stated, via ESPN.

“The incident is under investigation by the Sonoma County Sheriff’s Department. “Sonoma Raceway takes this incident very seriously and is dedicated to operating a facility that is welcoming to everyone.”

Sunday also saw the first time NASCAR fans returned to the track in Talladega, Alabama, where a Confederate flag with a “Defund NASCAR” banner was seen flying over the track.